Because of my topic, I find it useful to use a lot of Shinto/religion-specific vocabulary that most people might not know.  But since it's cool to have people understand me, I've decided to create a handy vocabulary page.

This page will most likely keep being updated over the course of my Fulbright.  More/better pictures coming when I have more pictures.

chounaikai - 町内会
Sort of like a neighborhood association.  They may or may not be involved in shrine activities, depending on the shrine.

ema - 絵馬
Usually comes in the form of a hexagonal wooden plaque for writing wishes on.  Literally "picture of a horse." 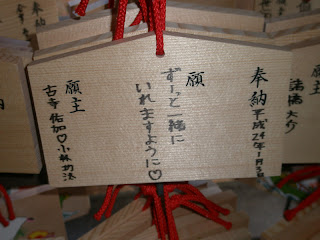 Kojiki - 『古事記』
Literally "Records of Ancient Matters."  It is one of the oldest extant Japanese documents, and records a variety of Japanese myths associated with the beginning of the world.  Some people call it "the Shinto Bible," but that's not a perfect fit.  You can read more about it in this blog post.

kami - 神
The main type of deity or spirit in Shinto.  Anything can be a kami--the sun, a rock, a frog, even the spirits of the dead.

matsuri - 祭り/祭
A Shinto ceremony.  Some matsuri are very small and only involve the priest and a few devoted ujiko, while others may be huge festivals with parades and floats and performances.

mikoshi - 神輿
A portable shrine or palanquin used to parade the essence of the kami around the boundaries of the district during festivals.

norito - 祝詞
A ritual prayer used in Shinto.  It's written in a very archaic form of Japanese, which makes it nigh impossible to understand.

ofuda - お札/御札
A talisman (usually paper) which contains the essence of a kami and is meant to be enshrined and worshiped on a family altar.

omamori - お守り/御守り/御守/お守
An amulet.  Usually comes in the form of a brocaded pouch with a small piece of sacred text inside, but can come in a variety of other forms. 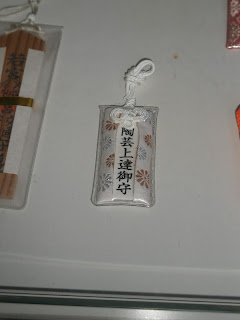 soudai - 総代
Sort of like the board of directors at a shrine.  They are chosen from among the ujiko, although their duties--and the amount of power they hold--vary from shrine to shrine.

tamagushi - 玉串/玉籤
A sakaki branch with shide attached that is ritually offered to the kami during ceremonies.

torii - 鳥居
A gate-like structure used to mark the entrance to a shrine or other sacred place.  Torii are most commonly made of stone or wood, although there are some metal ones as well. 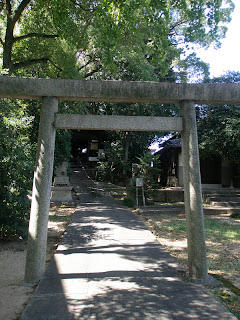 inaka - 田舎
The countryside.  Used most commonly in the phrase "this place is super inaka."

omiyage - お土産
Gifts you bring back whenever you go traveling.  They're usually food from wherever you traveled to.  Not to be confused with "souvenirs," which you might be bringing back for yourself.