In which I go to a nomikai, fail at being female, try to describe Oasis 21, and swoon over Joe Hisashi's music

So yesterday was the nomikai for Tuesday sensei's class.  It was held at an izakaya*, and was a lot of fun and nobody made fun of me for not drinking, which was an added bonus.  I got to hang out with some cool girls from my Japanese class and also meet some new people.  Although one of the girls I met seemed to think that everything I said/did was adorable.  That was...kind of odd.  I'm used to people thinking I'm scary/weird, not adorable.
Also, there was this thing called motsu nabe.
Me: What's in it?
Kocchan (from my Japanese class): Um...organs.
Me: Organs?
Kocchan: You know, from inside.  *gestures at her torso*
Me: ...what organs?
Kocchan: You know, organs.  From cows.
Me: What organs specifically?
Kocchan: .......just...organs, I don't know.  They're really chewy?
So I ate some kind of really chewy organ.  It had chunks of cartilage or something equally chewy in it, so...I haven't a clue what I ate.  It probably wasn't liver or intestine?  Maybe heart or something?
It should be noted that when I asked another girl what was in it, she cheerfully responded, "Organs!"  And then she couldn't explain further either.
So, yes, I have now eaten organ meat.  SORRY, DAD.  But I'm pretty sure it wasn't liver.  Or if it was, it was some seriously messed up liver.  I'm not sure if that makes it better or worse...
Other than the chewiness, it was pretty okay, though!
I also got to have an amazingly awkward conversation in English after Tuesday sensei spent about three minutes cajoling the poor guy into practicing his English with me.
But, overall, awesome experience, although kind of expensive (3,000 yen SO MUCH MONEY, I know).

Also, yesterday's culinary adventure was this: 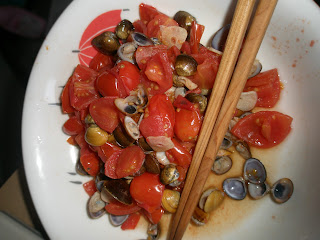 SO DELICIOUS.  May post a recipe at some point, or may just revel in my newly discovered ability to cook seafood.  (Although upon telling of the girls at the nomikai about what I had made for lunch, she informed me that I "cook like an old person," because young people only make instant stuff.  Well then, SIGN ME UP FOR THE OLD PERSON TRAIN.)

Today I decided to take a break from fieldwork/reading and ventured over to Sakae (sorry, Josh, but I couldn't find any yakuza shrines; I AM A FAILURE) and Oasis 21.  If you've never been to Oasis 21, the best description I've heard of it is "spaceship dinosaur topiary garden giant fountain shopping mall concert center."  Seriously, just look at pictures.  They have dinosaur topiary in their basement and a random pond on top of their TRANSLUCENT GLASS ROOF.  And you thought the Granoff Center looked weird.

There were a bunch of people performing today, ranging from Some Guy Who Thought He Was Really Sexy But Everyone Just Stared at Him to A Bunch of Girls Trying to Be a Cute Idol Group to A Bunch of Small Children Performing in a...Fashion Show (?) Set to Peppy Korean Pop Songs.  And then there was an incredibly awkward live commercial for Docomo's new "smart phones for women" (what does that even mean?), which featured a bunch of girls wearing long sleeved shirts and really short skirts parading around with smart phones while the cameras for the huge projected screens aimed at their legs.  Awkward.

Speaking of which, Japanese girl stereotypes kind of kill me.  It seems like, if you're under the age of 25, there is really only way you can be a proper girl, which is to be cute.  There are different variations in overall cuteness (for example, you can be ditzy cute or you can be sexy cute or you can be feisty cute), but, in the end, you have to be CUTE or you're not a girl.  Necessary components of this cuteness include:
- Giggling.  And doing that wide-eyed thing.  I don't know how to describe it.  There's this whole set of mannerisms that most college-age girls seem to have that I cannot pull off for the life of me.
- Wearing make-up.
- Wearing high heels that you can't really walk in so you just wobble everywhere.
- Not showing interest in academics/higher learning.**
- Not having male friends.***
- Dressing in a really feminine fashion.  SO MANY FRILLS.  Even the flannel shirts have ruffles.
Of course, not everyone sticks to those rules one hundred percent, but most girls seem to skip one or two at most, whereas I'm preeeeeeeeeeeeetty much skipping out on all of them.  Which might explain why everyone thinks I'm weird.  (There was a group of middle school girls on the subway today staring at me and whispering behind their hands and giggling madly and then pretending to be really interested in something else when I stared back at them.  The only word I caught from their giggly whispering was "blue" which makes me think they were probably making fun of my clothes.  SIGH.)
These rules seem to stop applying once you get married/pass the age of twenty-five, which is good except for the fact that I'm not twenty-five or married.  Solution: Hang out with old/married people.  And the few non-married people from my Japanese class who seem to not think I'm a total freak.
SIGH.  I guess I've just gotten really used to there being a whole bunch of ways to be a girl (or a guy or a human being) and nobody thinking you're weird just because you don't perfectly fit into the mold.  Then again, I guess people think I'm weird in the States anyway, just for different reasons.

ANYWAY, I left Oasis 21 and went to Central Park (across the street), where I discovered... 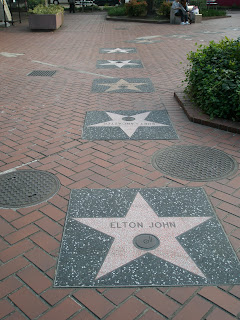 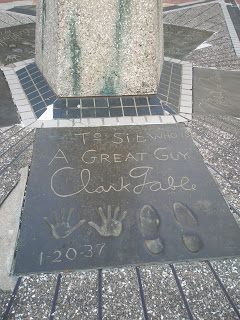 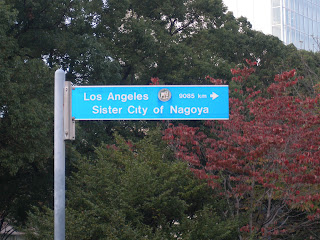 Well, that explains everything.

After that, I went to the huge Book Off! in Sakae, which was AMAZING and I died of happiness everywhere.  And also got the soundtrack for Departures.  Because, seriously, it is one of my favorite soundtracks in the world.****
P.S. Deep down, I am a giant geek and think Joe Hisashi is amazing.  Because he is.

Okay, gonna go listen to this CD about a trillion more times and then collapse.  I keep forgetting that I'm not a robot and need to actually sleep/take it easy sometimes...  Dang, I should really get that fixed.

*Uhhh, how do I explain this?  It's sort of like a bar...but...classy...and crossed with a restaurant.  That's a really bad description.  UM.  So there are tables, but you can order copious amounts of alcohol.  So like a pub, but without a bar (the physical bar, not the alcohol-serving bit) except Japanese and classy and serving Real Food?

**I wish this weren't true, because it kills me.  Someone actually told me to my face that I would never get married if I got a PhD because "boys don't like girls who are smarter than they are."  Several other people have confirmed this; apparently if you are a woman and go to graduate school, your dating prospects significantly diminish, 'cause the only people who will date you are other PhD candidates (and even then, maybe not).  (Of course, there are exceptions, but the fact that this seems to be the prevailing view makes me really sad.)  Also, apparently some mothers won't let their sons marry girls who have higher degrees (or, in some cases, the same level of education), because they're afraid that it will make the girls more powerful than their husbands.
Also, I was reading a book about Japanese new religions while waiting for everyone else to arrive so we could walk to the izakaya yesterday (my subway connection was such that I got there about 15 minutes before everyone else), and upon seeing me reading it, one of the other girls decided that the reason I was reading it was so that I could get into a good graduate school.  I was actually reading it because it was interesting.  Sigh.

***In Japanese class I mentioned that growing up 90% of my friends were male and now about half my friends are male, and several of the girls reacted as though I said I enjoyed chopping people up with chain saws, and then started whispering to each other behind their hands.  WHAT IS SO WRONG WITH HANGING OUT WITH DUDES?
The two girls who I hang out with most in the class (who, it should be noted, are both significantly older than me and married) said afterwards, "You know, it does make sense that most of your friends would be boys.  You are really...boyish."  When I asked for clarification, they said that I was really straight-forward and that I dressed boyishly.  Can't really argue with either of those, I guess.

****Also, my advisor mentioned it in class and said that it is a movie that everyone should watch.  SO GO WATCH IT.  If you aren't crying through half of it and laughing through the other half, YOU HAVE NO SOUL.
Posted by Dana at 10:04 PM