I got a late start this morning, since all of yesterday's excitement really wore me out and I consequently slept until 9 a.m.
I know.  I am a bad person.

Anyway, my first stop was Shirohige Inari Taimeisha, where I actually got to meet the guji this time.  He was pretty busy, so I could only talk to him for a few minutes, but he said that the shrine is very unusual in that it doesn't have 氏子 (ujiko; the best translation is probably "parishioners," but essentially they're people from the neighborhood who, because of their proximity to the shrine, have a special relationship with it wherein they give the shrine money and the shrine's kami protects them); all the money and support from the shrine comes from people who volunteer because they personally believe in the shrine's kami.  The distinction may not seem to make much sense in English, but the idea is that, whereas ujiko are obligated to donate to the shrine because of their proximity and regardless of their personal belief, Shirohige Inari Taimeisha is supported by people who actively seek the shrine out.  Anyway, the guji said that recently the shrine has been losing supporters, because there's been a demographic shift; a lot of young people have been moving into the area, and whereas the older generation may be more inclined to support a small community shrine, the younger generation tend to be more interested in Buddhism and Christianity.

My second stop was Susanoo Shrine...where no one was there AGAIN.  This is the...third or fourth time I've visited the shrine?  I kind of have to wonder if the shrine has any staff at all.

Then I hopped on the subway and rode to the cluster of three shrines I couldn't find last week.  Unfortunately, what wasn't clear from the map was that the shrines were situated on the top of a very steep hill.  Hills + asthma = not totally awesome.

Still, I made it to the top of the hill, where I discovered Shiogama Shrine. 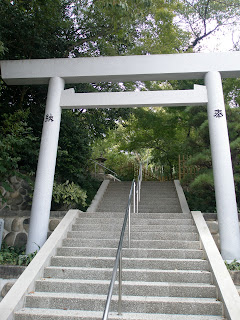 You have to climb about a million steps to get to the shrine (the path curves to the left at the top bit you can see), but the actual shrine is very nice.  It has a big open courtyard and... 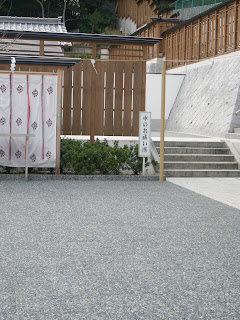 I might have read about these excessively, so seeing an actual one was really cool.

In any case, the shrine was really busy, because apparently a bunch of families decided to take their kids for omiyamairi* today.  I didn't want to bother the shrine workers while they were so busy, so I just sat quietly in a corner of the courtyard and watched the goings on.  It's amazing how much you can learn just by watching people unobtrusively.
Plus, ADORABLE CHILDREN EVERYWHERE.

Anyway, after that I hiked back down the hill to... 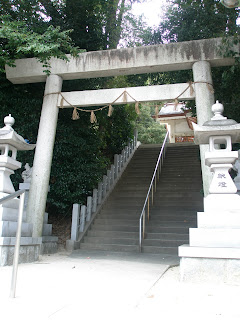 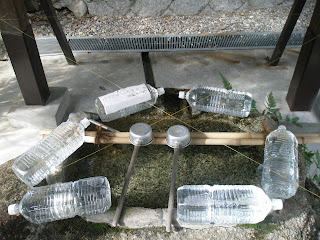 ...where their hand-washing station is surrounded by water bottles?  I'm not entirely sure.

Anyway, there was no one there either.
HMM.

So I hiked back up the hill. 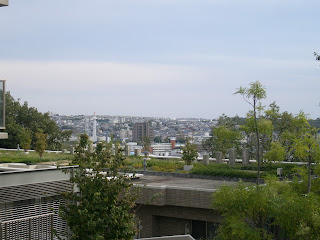 But I paused midway to take this picture.  It might be a bit hard to tell from the lame picture, but I was VERY high up. 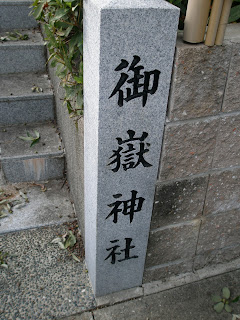 And then I found this shrine.  I really need to look up the kanji, because I haven't a clue how to pronounce its name. 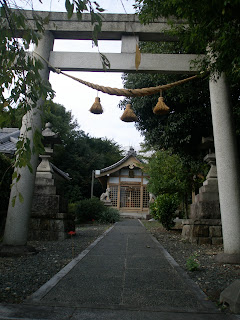 Anyway, it's a pretty small shrine, as you can probably tell--just a single shrine building, plus the shrine office. 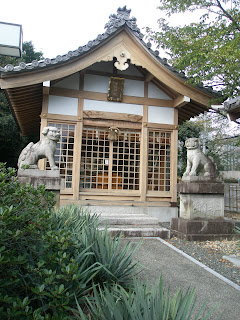 This is the shrine building. 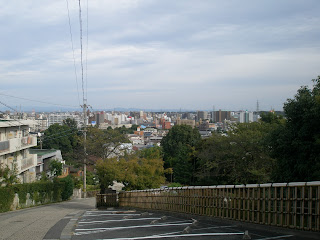 Anyway, at that point, I decided to head back, and had to walk down the monster hill again.

Then I went to the grocery store and bought one tenth of my weight in rice.  It was pretty epic.

As I was making dinner, I had a conversation with Sae, my Taiwanese suitemate.
Sae: Oh, by the way, can you eat wasabi?
Me: Oh man, no, I can't eat wasabi at all.**
Sae: What?  Really?  I got a bunch of wasabi, and I was going to say you could use some of it if you want...
Me: Oh, thanks, but I really can't eat wasabi.
Sae: Why?
Me: It's too spicy.
Sae: You can't eat spicy food?
Me: No, I love normal spicy food.   I just don't like wasabi-spiciness.
Sae: Ohhhhh, okay.
Then I chopped vegetables for about two minutes before Sae suddenly resumed the conversation.
Sae: By the way, people are saying you're married.  Is that true?
I confess I nearly chopped my finger off.
Me: WHAT?  WHERE SAID THAT?  I MEAN, WHO SAID THAT?
(Unfortunately, shock apparently makes my Japanese disappear.)
Sae: I don't remember, but there's definitely a rumor going around.
Me: I'M NOT MARRIED.  REALLY REALLY NOT MARRIED.
And then we wound up talking about frying chicken and this weird kind of green-onion-on-steriods vegetable.
...I haven't a clue how anyone thought I was married.  Maybe because of my total lack of interest in ogling boys?  Or maybe because I wear a ring (although on the wrong hand, on the wrong finger, and made of the wrong material)?  I HAVEN'T A CLUE.

In other news, some of the other Fulbrighters have blogs.  You should go check them out.
Alex is studying LGBTQ culture and gay rights in Japan.
Steven is studying protein folding.
Sara is studying gender and civil society in Japanese elections.
Nellie is studying Japanese textile production.
All of them are lovely people, and are far more interesting than I am.

And on a final note, I finished Tiger and Bunny and still wholeheartedly recommend it.  "Tiger and Bunny: Over and Out!"  (Also, the title of today's blog comes from an early episode.  You should watch it and find out what the heck it's referring to.)

*The first visit to a shrine.  Essentially, parents take their newborn babies to meet the local kami and ask for the kami to watch over their children.

**Wasabi is basically my secret weakness.  Eating wasabi feels somewhat akin to having someone stick up a flame-thrower up my nose and then turn it on full-blast.  Not a pleasant feeling.
Posted by Dana at 8:15 PM