In which Geoff's hair is alarming and mystifying

So on Wednesday, Geoff and I went to visit Ise Shrine, since he wanted to go and I am all for visiting Ise as many times as possible.  After some drama involving not realizing that you need a high speed ticket AND a normal ticket to ride the high speed line, we finally made it to Ise in pretty much one piece. 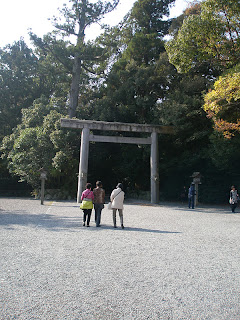 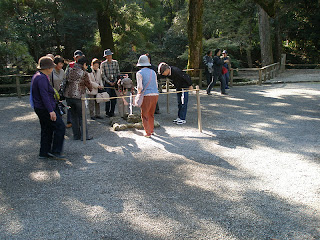 While it was less crowded than last time, there were a lot of tourist and pilgrimage groups visiting the shrine. 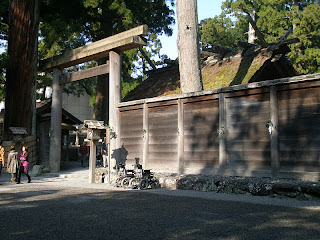 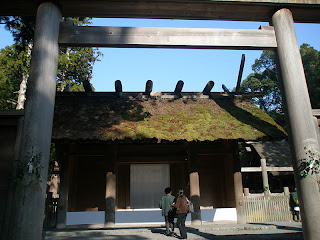 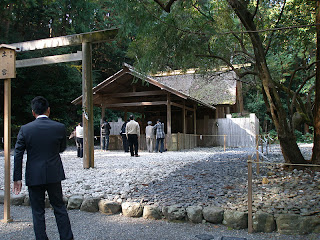 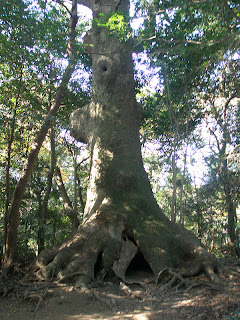 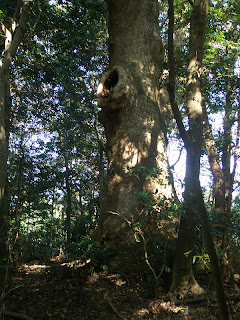 This is officially the coolest tree.  And, yes, those two pictures are of the same tree.  IS IT COMPLETELY HOLLOW?  I DON'T KNOW.  MAYBE IT'S FILLED WITH AWESOMENESS.  CAPITAL LETTERS.

So when we finished at the outer shrine, we decided to walk to the inner shrine, because it's only about a 3.8 kilometer walk, and the bus costs 460 yen or something ridiculous like that. 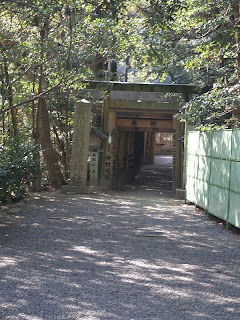 And on the way we found a tiny Inari shrine. 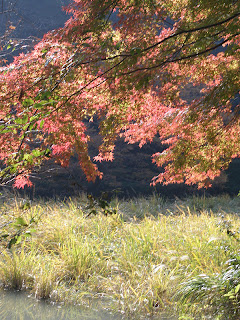 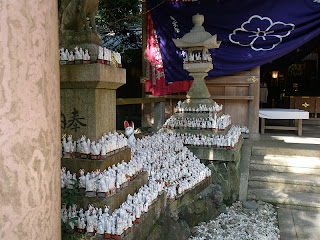 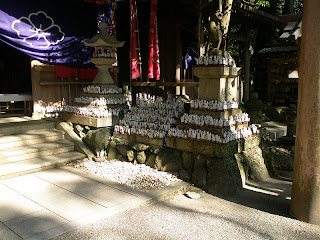 So many fox statues! 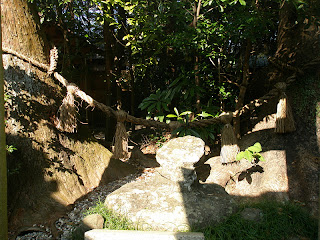 I assume that the combination of the rock and the trees was sacred, but I'm not entirely sure, 'cause I've never seen a rope tied like that...

On the way to the inner shrine, we passed by a construction worker who was so impressed with Geoff's hair** that he radioed his colleague to tell her about it.  DANG.

So then we grabbed lunch, where there was an amusing incident in which our waitress remarked to me how good Geoff's Japanese was (I guess I look the less foreign of the two of us?) and I said he was my kouhai.  When she came with the bill, she gave it to me, since I was the senpai.  SUCCESS.  I have NEVER been given the bill while eating with other people before.  Geoff was not amused.  (Especially since, as he never fails to point out, he is older than me.***)

So then we headed over to the shrine: 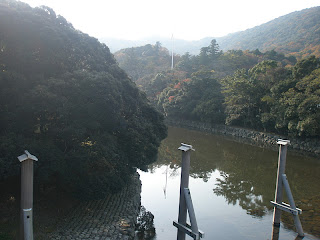 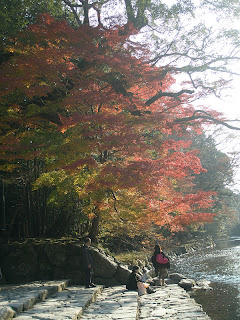 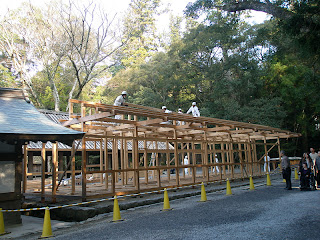 Since Ise has to be rebuilt every twenty years, there's always a lot of construction going on there. 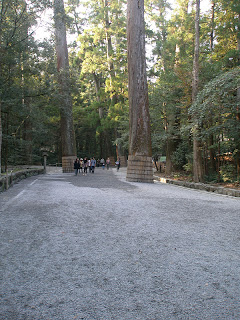 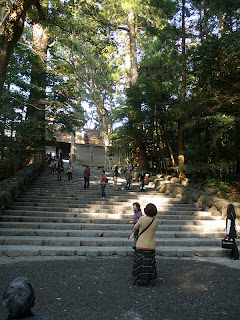 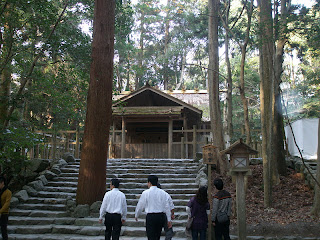 Here's one of the side shrines I didn't get to see while on the field trip. 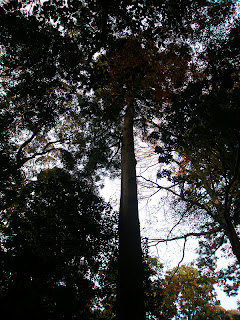 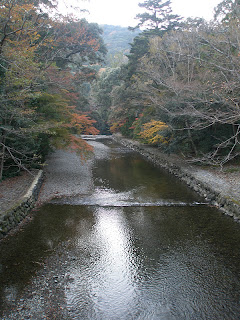 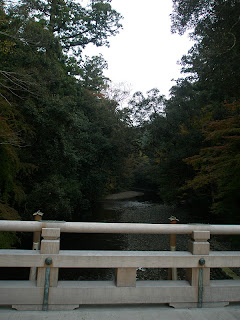 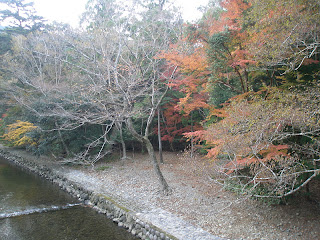 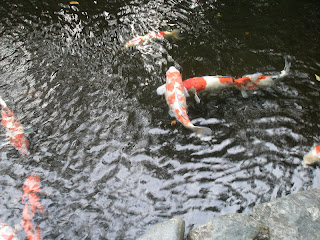 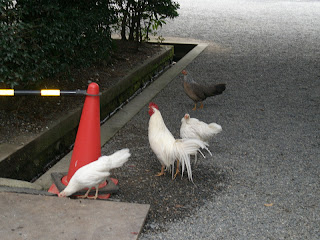 (I bet you are incredibly impressed by this commentary.  Honestly, I don't have that much more to say about Ise this time, except that going to Ise with an art major is pretty epic.  You get to hear all sorts of interesting facts about architecture.) 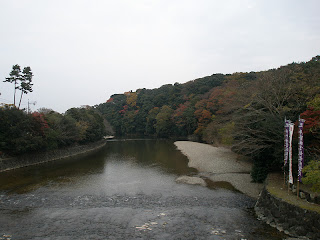 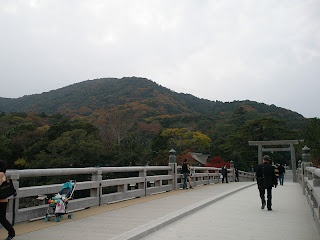 Anyway, after that we walked back to the train station and took the train back to Nagoya, where we visited an onsen.  If you've never been to an onsen before, imagine the hottest bathtub in the world and then multiply it by 1.3.  There are people who have passed out from dehydration in onsen.  Also, because it's communal (although gender segregated), it means NUDITY EVERYWHERE.  If you have any modesty at all, an onsen is not a place for you.
But it was really nice!  I hadn't been to an onsen in so long, and they're about 150% better when it's not summer, so the air outside is actually colder than the water.

Thursday morning I mostly caught up on work I hadn't been doing because I was out ADVENTURING, but then Thursday afternoon Geoff and I met up with Itou-san for...tea?  It was a meal at 3 p.m., which I think would be tea.  Except there was no actual tea involved.  In any case, we had a nice chat.  (Although, when we stopped by Kawahara Shrine to meet her, the women in the shrine office saw Geoff's hair and were stunned into silence for a few moments.  He leaves one heck of an impression.)

In other news, I finished reading To Dream of Dreams, which Professor Dorman recommended.  It's about constitutional politics and post-war religious freedom in Japan.  I already knew a lot of the material, but it was still a pretty interesting read.

...on a final note, Geoff has spent today texting me about how awesome Kyoto is.  Excuse me while I make disgruntled faces.
>:I

*Maple leaves, especially in fall when they're turning all sorts of pretty colors.  They are pretty much my favorite leaves.

**Geoff has an incredibly impressive afro.  It inspires stares of awe.  It also makes small children burst into tears.